Judo first arrived in the Chicago area in Sept. 1903, when Mr. Graham Hill arranged for a judo demonstration by Prof. Yamashita in the cities of New York and Chicago. According to Prof. Kotani, in 1916, Heita Okabe, 4th Dan; Toshitaka Yamauchi, 4th Dan; and Ken Kawabara, 4th Dan were teaching judo while studying at the University of Chicago; this would be the earliest organized judo activity in the Midwest.

JJI was incorporated as the first judo club in the Chicago area in 1938,the Jiujitsu Institute. Prior to 1939, judo was practiced sporadically by members of the Japanese Consulate and other interested individuals. The Jiujitsu institute became the first Kodokan Judo Club in Chicago, the first instructor was Ralph Mori, who eventually opened his own judo club in 1941. Mr. Shozo Kuwashima came from New York in 1939 to teach at the institute. Also in 1941, Mr. Yasushi Tomonari came from New York to teach at the institute. During May of that year, Mr. Masato Tamura, then a 4th dan, came to Chicago from Fife, Washington, and also taught at the institute. In 1944, Mr. Tamura became the owner of the Jiujitsu Institute.

After World War II, judo in Chicago received numbers of Japanese who were relocating in the Midwest section of the country. Vince Tamura came to Chicago and helped out at the Jiujitsu Institute.

The Chicago Judo Black Belt Association was formed during 1947 and a charter was received directly from the Kodokan. (As a recognized judo organization the yudanshakai could promote up to 3rd-degree black belt.) At that time the Chicago Judo Black Belt Association covered the states of Wisconsin, Missouri, Minnesota, Ohio, Indiana, Arkansas, Louisiana, and Michigan. The vice-president would be Mas Tamura.

In 1949, MasatoTannura became the president of the yudanshakai and remained in that office for the next fourteen years. The Jiujitsu Institute members were Masato Tamura, Vince Tamura, Bob Belhatchet , Frnak Leszczynski , Bill Burk. Bill Berndt, and Bill Kaufman. During these years, any team that represented the U.S. was mostly made up of people from the Chicago Judo Black Belt Association. Chicago sent teams to the first two Pan-American Judo Tournaments and one of the two American representatives to the 1st World Tournament in Japan.

In 1954, Vince Tamura represented the Chicago Yudanshakai and the U.S. in the 1st World Tournament. There were no weight divisions in early world competitions, so the matches were rough. Tamura lasted until the semi-finals, defeating heavier and higher ranking people. His only loss was to a future world champion.

On Feb 22nd, 1943, when the 143 lb. American born Jiujitsu master Masato Tamura met the 204 lb. wrestler Karl Pojello in an undisclosed location in Chicago under the watchful eye of the press, members of the military and Avery Brundage from the Olympic Committee. Pojello bragged he could beat any Jiujitsu expert in the world. He wanted to show Western superiority over Asian fighting skills. So he quickly got hold of someone 60 lbs. lighter and a foot shorter than him, Masato Tamura. 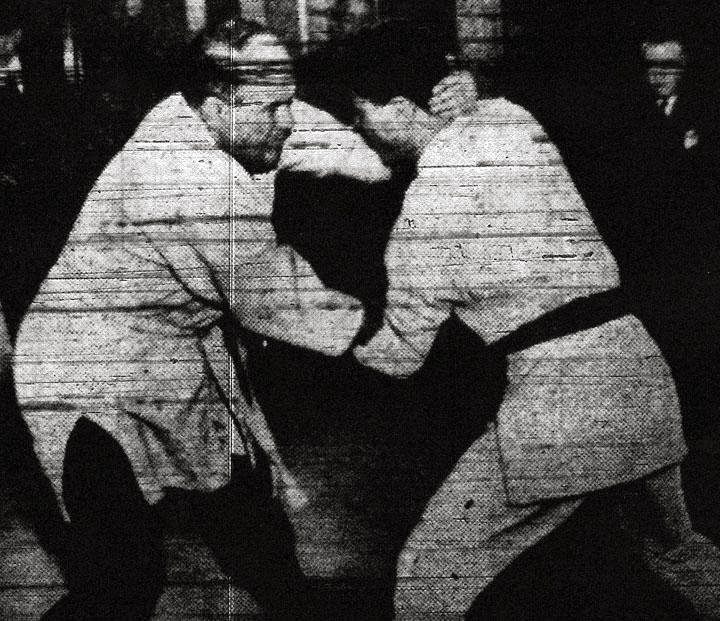 Masato beat the bigger man in 1 minute and 20 seconds. I guess that is why Gene LeBell would ride a freight train boxcar from California to take lessons with this man. Karl Pojello, older, cocky and heavier was clearly out wrestled. Masato was forced to take further punishment even after his instant victory and Pojello was clearly trying to punish him for the idea of being defeated by a little “Jap.”

Masato Tamura, at a time when his country was sending his cousins and friends to camps on the West Coast and him being subjected to this kind of abuse was clearly a heroic figure as he used Pojello as the whipping boy to make it clear to the military that Japanese martial arts were a essential skill for members of the US forces.

Masato Tamura became a legend after that 2 page spread in the Chicago Times. People like Mas Tamura should never be forgotten.

1916 Heita Okabe, 4th Dan; Toshitaka Yamauchi, 4th Dan; and Ken Kawabara, 4th Dan were teaching judo while studying at the University of Chicago; this would be the earliest organized judo activity in the Midwest.

1938 the first judo club in the Chicago, the Jiujitsu Institute. Was incorporated The Jujitsu institute became the first Kodokan Judo Club in Chicago.

1941 During May of this year, Masato Tamura, 4th Dan, came to Chicago from Fife, Washington, to teach at the Jiujitsu Institute.

1943 In Chicago, 140 lb Mas Tamura chokes out 210 lb. wrestler Karl Pojello in 1 minute and twenty second in a demonstration match for the US Military. This match was arranged by sportswriter for the Chicago Daily Times named Gene Kessler after the release of Behind the Rising Sun, “to find out about the comparative merits of our wrestling when matched against the Japs’ jujitsu.” First officially recorded mixed martial arts match.